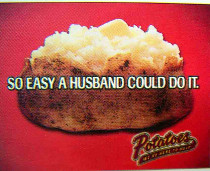 That's the title of this awesome video produced by some students from the University of Saskatchewan .

SPOILER ALERT
They cherry picked some ads to illustrate how the media are sexist towards women (portraying them as submissive) and then sweded them replacing women by men (and vice-versa).

This culture jam is a school project that was created for a Women and Gender Studies class at the University of Saskatchewan by Sarah Zelinski, Kayla Hatzel and Dylan Lambi-Raine. We wanted to show how ridiculous media portrays gender roles and stereotypes in advertising through presenting gender roll reversals.

As pointed, it is shocking how unexceptional the original ads feels (compared to the their alternative). After a few hops on the web, I've landed on this incredible archive (and study) of gender in advertising: The Gender Ads Project. It features about 4000 ads classed and categorized.